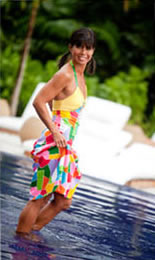 born in tokyo and raised in japan, guam and hawaii, chrissy’s bicultural and bilingual background helped shape her into the cosmopolitan artist she is today.

chrissy went to honolulu’s preparatory punahou high school and graduated with honors from the university of california at santa barbara. she then went on to new york to study at the prestigious international center of photography. at the same time, she apprenticed with some of new york’s top wedding photographers and was able to develop her unique style.

since founding chrissy lambert photography in 1997, she has become one of hawaii’s most sought-after wedding photographers. she is regularly highlighted in hawaii bride & groom magazine and has also been featured in a variety of leading national and international wedding publications. she marries documentary photography with her own artistic approach to find the perfect balance of storytelling and spontaneity.

chrissy lives in the manoa valley with her identical twin boys, chase and sage. her family is her first love, but she can be rendered weak in the knees over the lululemon workout clothes, claire vivier bags and jo malone’s french lime blossom perfume. when she isn’t behind the camera, she can be found fueling her passion on a surfboard.